No Lifeguard On Duty – The Condom Checklist by Amahl S. Azwar 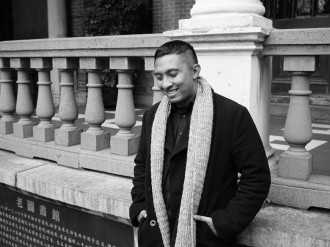 The harsh truth of gay dating life is that there is no “lifeguard on duty.” Yes, “swim at your own risk” because no one will stop you even when you get too close to “sharks.” The only thing that you can rely on is that little voice inside your head.  Remember Olivia Pope from Scandal? If you are familiar with this character from the American political thriller TV series, you’d remember how her gut would tell her everything she need to know. Her gut is never wrong.

I’d say the same thing to you: Listen to what your gut is telling you. Trust your gut.

However, let’s face it: sometimes you may “swim too close” to these “sharks” no matter what. I am the last person to judge you. The heart wants what it wants, right? (Indeed, even Olivia Pope once let her heart messed up her judgment.)

These “sharks” could be anyone: that hottie you met at the sauna, this hunky personal trainer on Grindr, or that cute nerdy guy reading Oscar Wilde’s The Picture of Dorian Gray on a train. Your heart is beating faster. One thing led to another until—the next thing you know—you both ended in his bed. Naked.

And, even though you want to protect yourself against HIV by using condoms, these “sharks” would give you excuses not to.

What would you do?

Like I said, there is no “lifeguard on duty” here. You have to protect yourself from these “sharks.” Be the one that rescues you.

Wearing a condom is more than just a way to protect yourself from HIV and/or sexually transmitted diseases (STDs). In fact, it’s all about self-respect. Using condoms means you have enough respect for yourself (and for other people, for that matter) by protecting yourself from any harm.

In addition, you don’t need someone who doesn’t respect what is really important to you.

Below are several typical scenarios that you might find yourself in and what it should look like. Hopefully, this will help your “inner voice” to constantly remind you to protect yourself.

First scenario: Sometimes all it takes is just one time.

So you met this hot guy at the gym/sauna. He gave you obvious signals that showed how much he was into you and, obviously, the feeling was mutual. The next thing you knew, you were kissing passionately in one of the toilets.

He asked you to bend over …. but you realized that you didn’t have any condom with you (well, obviously, the condoms were in your wallet and who brings his wallet to a sauna?).

Yet the dude wanted to continue. He assured you that he was clean.

“But he was hot!” Yeah, I understand. But that does not mean you have to lower yourself just to get this guy in your list of hook-ups. Trust me. There are plenty fishes on the sea. Besides, if he could do this with you imagine to how many men he did the same thing before? It’s not worth it. I don’t care if he looks like Chicco Jerikho or Nicholas Syahputra. It’s. Not. Worth. It.

“I’m sorry. I’m just not comfortable with this. If you can wait, I have some condoms in my wallet. Let me grab them and we can continue. Or maybe we can go to my place or your place?” you said after stopping him.

If he really want you, he would simply agree and hold it. If he doesn’t? Screw him. (Sidenote: next time, always have some condoms with you the next time you go to a sauna!)

You were at his place. The kissing was hot! The foreplay was hot! And then you guys were ready to the “main course.” You noticed he didn’t wear a condom so you stopped him and asked him to use one. He told you that he didn’t have any condom with him.

“I forgot to buy one today,” he said.

“It was so close! I’m afraid that if I interrupt him like this he’d lose his mood and the passions go away!” Well, honey, I understand. But I think it is better to pause it for one minute just to grab your jacket/bag/wallet and take out one condom. It would be worth it. And what is with this crap about “the passions will fade”? You are a hot stuff! I’m sure you can light up the fire once again. If he really want you (and, more importantly, respect you!), he’d wait.

You have to bring condoms you with you all the time. Always assume that the other guy do not have a condom with him. Remember: this is your life. So make good choices and go to the nearest drugstore before the hookup and buy some condoms. People are looking at you? Screw them. They won’t pay your bills should you get STDs or, worse, HIV, and need to take medications.

“Besides, it’s only this one time,” he said with a wink.

Go on now. Walk out that door. Just turn around now. Told him: you’re not welcomed anymore. He deliberately wanted to hurt you by not using protections. You never really know someone’s HIV status after all so using condoms is the only way to make sure your safety. And he got the nerve to tell you to just “risk it”? You don’t need this loser.

You already explained to him that using condoms is important to you. He told you he understood how much this mean for you. However, he admitted he could not “function” with condoms.

Here’s why this one is hard: “But if it’s not hard how can we make love?”

Oh, honey, do I have to remind you again how hot you are? Trust me, you can get him “hard.” Keni Styles, a British pornographic actor of Thai origin, once said that “you don’t make love to someone with your dick. You make love to someone with your whole body, your attitude, and your presence.” Sex is more than just a collaboration between two genitals. Be confident. Remember: self-confidence is sexy no matter how you look at it. (Uh, your partner might need a boost of confidence, too).

I can’t even …. Look, good condoms are expensive but compare them with how much money you have to spend if you get STDs or HIV? Trust me. Condoms are cheap.

In an article with the Magdalene, I wrote that you can read all the information about condoms and other means to protect yourself from HIV positive but, at the end of the day, it’s your heart and your mind that make the difference.

This article is a “gentle reminder” on how you can use condoms to protect yourself. In the end, as I said, you would find no “lifeguard on duty” out there. So, please, respect yourself and make good choices.